They are not so lenient with financial institutions though. The authorities frown upon banks and similar organisations allowing their customers in South Africa to fund their online casino accounts. Their remit is simple – how can a player wager at an online casino if they can’t get money into their accounts?

So, if you are based in South Africa and you want to play at an online casino that accepts South Africa players you may face issues in getting money into your casino account.

What the best solution to my issue if my bank won’t let me fund my casino account?

If you are having problems with getting your bank to allow you to transfer funds to your chosen online casino, then one potential solution is to use Bitcoin. You could use any cryptocurrency you like (for example, LiteCoin or Dash), as long as the casino you are using accepts them. You do not need to use a bank to pay an online casino if you use Bitcoin, making it perfect as a currency to use at online casinos.

Just a minute … I have no idea what Bitcoin is!

Bitcoin was created in 2009 by Satoshi Nakamoto. To this day, nobody knows if Satoshi Nakamoto is a real person, a pseudonym, or the name used by a group of people who came up with the Bitcoin concept.

Bitcoin is a cryptocurrency. This means that it exists ‘physically’ as a currency even though it is a value in a piece of software called a Bitcoin wallet. Like all cryptocurrencies Bitcoin is a decentralised currency, which means it is not tied to one particular country, or group of countries.

You can, if you like, imagine Bitcoin as being a physical coin. When you go to your local shop and pay for something using coins you simply hand your money over to pay. There are no banks involved in the transaction. True, you probably obtained your coins from a bank originally (or you were given them as change from a note you acquired from your bank), but once you obtained your coins your bank had no say in what you did with them.

The same is true with Bitcoin, although instead of handing them over in the real world, you hand them over on the internet. When you make a transaction using Bitcoin at an online casino, your Bitcoin wallet (which is a piece of software on your computer or, as is more common these days, a piece of software stored in the cloud) connects to the online casino’s Bitcoin wallet. Bitcoins then pass from one to the other, depending upon which way the money is being transferred.

I still don’t get it … how does Bitcoin work?

Well, you don’t really have to worry about how Bitcoin works. If you are really worried about it there are plenty of sites on the internet where you can do your research and become a cryptocurrency expert if you so wish.

How do I get my hands on some Bitcoins?

Bitcoins can be bought from Bitcoin dealers. You exchange your own currency for Bitcoins, just as you would at any currency exchange. Before you do that, you need to obtain a place to store your Bitcoins, and that ‘place’ is known as a Bitcoin wallet.

In the early days of Bitcoin, wallets were stored on computer hard drives. This was perilous as if someone’s PC on which a Bitcoin wallet was stored was lost, stolen, or had to be wiped clean due to a software failure then the Bitcoin wallet and the Bitcoins within it were gone for good. There is the tale of James Howells, an IT worker who threw out a hard drive containing his Bitcoin wallet and 7,500 Bitcoins. At their peak, those Bitcoins were worth a staggering $146 million!

These days Bitcoin wallets are stored in the cloud. There are plenty of places online where you can obtain yourself a cloud-based Bitcoin wallet.

Once you have your Bitcoin wallet, just find a Bitcoin broker and buy some Bitcoins. As Bitcoins are so expensive these days (at the time of writing, one Bitcoin is worth R175,000) you will probably buy Milibits instead. A single Bitcoin is made up of 1,000 Milibits.

Once you have a loaded Bitcoin wallet, you are ready to use your Bitcoins (or Milibits) to fund your online casino account.

How do I use Bitcoin (or Litecoin, or Dash) at an online casino?

First and foremost, you need to find an online casino that both accepts South Africa players and accepts deposits that are made using Bitcoins or other cryptocurrencies. This could be a tough search … if it wasn’t for the fact that we have listed a few online casinos later on in this article that tick both these important boxes.

Just head to the cashier section and choose Bitcoin (or your chosen cryptocurrency) as your deposit option. You will then be given the address of the casino’s Bitcoin wallet.

Head to your own Bitcoin wallet, sign in and enter your password. Once your Bitcoin wallet is open you will be able to make the transaction. Just section the amount you wish to transfer and enter the address of the online casino’s wallet.

Once you have approved the transaction, the money should appear in your online casino account within seconds. Don’t worry if it doesn’t – if a transaction fails (which is a rare occurrence) your Bitcoin cash will simply bounce back into your Bitcoin wallet.

When it comes to withdrawing your winnings, all you have to do is reverse the process. Go to the online casino and enter the cashier section. Select how much you wish to withdraw and choose Bitcoin as your withdrawal method. Your Bitcoin wallet details should already be held (if you have previously made a Bitcoin deposit) but if those details are not there, just add the address of your wallet. Once you are happy that everything is as it should be, approve the transaction.

Bitcoin transactions are usually immediate (as the people approve the encrypted transactions now do so via high-powered PCs and software) so your money should appear in your Bitcoin wallet virtually instantaneously.

That’s really all there is to it! The Bitcoin transfer process is incredibly simple once you have everything set up, and all your transactions are processed without the intervention of any banking organisations.

If you have a Bitcoin wallet then don’t forget there are other places where you can use Bitcoin as a payment services provider – not just your chosen online casino!

I’m eager to get started with Bitcoin … which are the best online casinos for South African players that accept Bitcoin?

Africasino has been around a while now and has established itself as one of the best all-round casinos for players in South Africa. It accepts many payment methods, but the only cryptocurrency it accepts is Bitcoin.

This online casino is a superb all-rounder, with a great range of games and enough help options to keep anyone happy. Its licensing comes from the Government of Curaçao, which makes it fine for South Africa players to play here. If you play at this site, make sure you check out the special promotions that are available, including the WonderWheel and the Summer Swing.

The Springbok Casino is possibly the most Bitcoin-friendly online casino that accepts players from South Africa. If you want to learn even more about Bitcoin, then the site has a whole section dedicated to the world’s leading cryptocurrency. There is even a video you can watch that explains the whole process to you, so using Bitcoins here could not be simpler.

Of course Springbok Casino is not just about Bitcoins! The site has loads of amazing slots and entertaining casino games for you to enjoy, all sourced from top software providers RealTime Gaming. Check out the generous promotions as well! 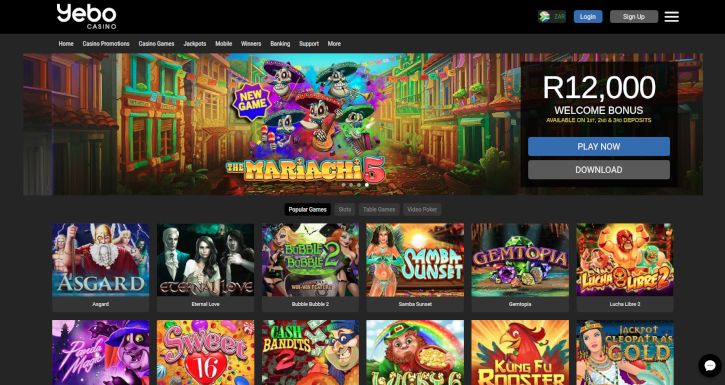 Yebo Casino is another online casino that says ‘yebo!’ to both cryptocurrencies and casino players in South Africa. At the moment the only cryptocurrency that it accepts is Bitcoin, but we hope this casino will move on to accept other leading cryptocurrencies too in time. Using Bitcoin here is fabulously easy, and all Bitcoin transactions (both deposits and withdrawals) are processed instantly.

Like the Springbok Casino, Yebo Casino sources all of its software from RealTime Gaming. This means you are free to play such classic slots as Asgard, Eternal Love and Bubble Bubble 2. There are a range of table games too, including blackjack and roulette, plus several video poker titles.

You know you are onto a winner as soon as you arrive at the Thunderbolt Casino. This site not only looks fantastic, it also puts customer care very high on its list, as help is only ever a few clicks of a mouse away.

It’s another online casino that accepts Bitcoin without a quibble, and it makes the transferring of your funds via Bitcoin super-easy. You’ll soon be funding your online casino account at Thunderbolt and taking full advantage of the superb array of slots and casino games that are available at this site.

There are four things that the Punt casino has in common with lots of other online casinos in South Africa: (1) It accepts Bitcoin (2) It has licensing from Curacao eGaming (3) all its software comes from RealTime Gaming and (4) it claims that it is the best online casino in South Africa!

We do not share that final opinion as we have seen a handful of better online casinos that accept South African players, but we do feel the Punt Casino is right up there with the best. It has the usual amount of entertaining games to play, plus a great line of promos. You are certainly not taking a punt in the dark if you choose to play at Punt Casino!

Remember, the only way you can win at an online casino is by pure luck, so we hope you get lucky, however, if you find yourself gambling with money (Bitcoins or otherwise) that you cannot afford to lose, then you may have a gambling problem.

Always gamble responsibly. If you think you need help with gambling addiction, then contact your online casino and they will guide you to a place where you can obtain help.